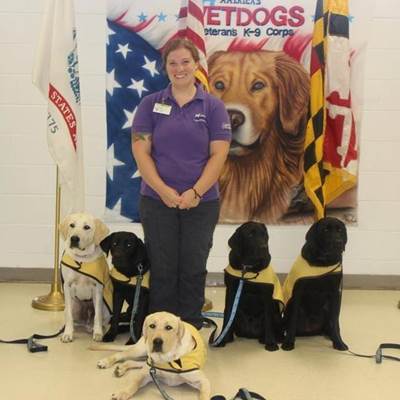 I started training in 2005 when I received my own first dog, a Great Dane I named Tiny, when I was 18 – Tiny was adopted from a rescue, had a rough background so I had a lot to undo & redo. She was scared, especially of men & had no idea how huge she was. I soon found out that I was good at this new challenge, so I started volunteering for the Great Dane rescue, training other adopted or fostered dogs that had issues. Later, in 2007 I got a job at PetsMart & started training all different types of dogs basic to advanced obedience. The time I spent at PetsMart provided me with a solid foundation & I found myself wanting to do more than just obedience training. I worked there for about 4 years before leaving to start my own business. It was a struggle, so I began training at a local kennel but since it was so far out in the country, got little exposure so played around with grooming for a bit before leaving to go out on my own again. I spent a little over a year at the kennel & sincerely enjoyed my time there, meeting some wonderful people & dogs in the process. This time around I focused mainly on dogs with issues such as fear, aggression, & lack of socialization, the ones that really needed help or the handlers were desperate for a solution after other trainers had given up. I liked the challenge & through my own work & research developed my own approach to dealing with these issues. Understanding the canine psychology is key to dealing with these issues. I found that I had a real knack for reading & then filling these troubled dog’s needs & instilling a sense of purpose which allowed for the development of the desired behaviors. Just like people, dogs generally want a clearly defined role & that does not mean being the alpha dog. It means giving them a job to do – dogs are social animals with each member of the pack having a specific role. If you do not identify the role & needs that suits their mentality best, they will create their own position in the pack, generally claiming alpha when most dogs buckle under this added stress creating issues. I love helping owners to identify & develop this role, building a healthy happy relationship with their canine partner. In 2013 I was offered a job at Eastern Correctional Institution with America’s VetDogs, (vetdogs.org) training service dogs for America’s veterans & first responders. VetDogs is one of the premier service dog training nonprofit organizations in the Country & I oversaw their “Prison Puppy Program” in Westover, MD. It was such an honor to be chosen by them though I must admit I was a bit nervous about working inside a prison. I have worked with them for almost 8 years now learning all types of skills – I managed a group of inmate dog handlers & a group of volunteer weekend raisers to raise successful service dogs. The experience at VetDogs goes far beyond anything I could have imagined. I learned a lot about myself & sincerely enjoyed working directly with inmates, some of whom had life sentences or had never raised a dog of their own. I also have learned a lot about the work these amazing service dogs do & how life transforming they are for their forever veteran or first responder handler. I love training dogs & their pet parents & enjoy the challenge each new dog, each new personality brings to the table. I like seeing how a much healthier relationship can happen once the handler understands the needs of their dog, learning to work together in a happier way for both. When I am not training or playing with puppers, I’m a full-time wife & mother & love being with my family. I married my high school sweetheart & home school my 2 kiddos, teach yoga, garden, raise chickens & love cooking.
X